The vi editor is a mode-based editor present on must UNIX-like systems, including Linux and Mac OS X.

Me and vi editor

Lots of people like me, who spend much of their time programming computers, are getting into using an editor called vi to write their software. 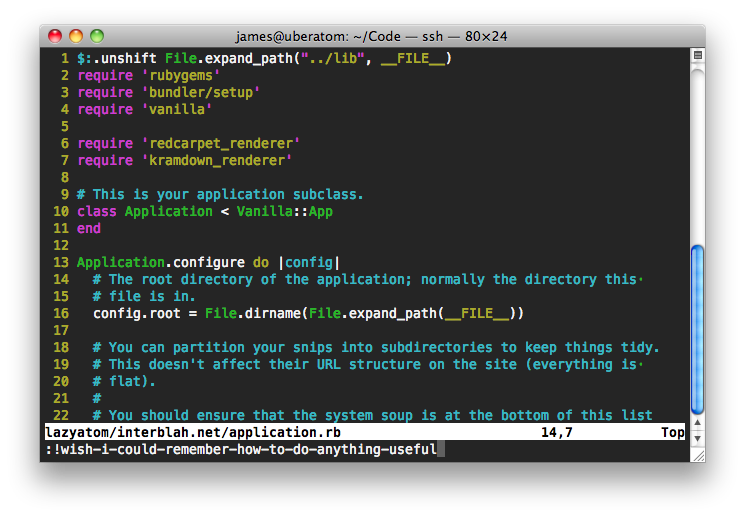 Some people really love using this tool. The tell me that it is “faster”, and “more efficient”, and that I should stop trying to use the mouse when I’m editing text. “Look!”, they will say as they deftly enter an incantation along the lines of :Sxf! boo1 and quicker than the eye can see, some block of text has moved, re-indented itself and now lives happily somewhere else in the source code.

There are times when I’m swayed, and I try to use vi exclusively so that I can learn be just productive enough that I might then be able to to use it regularly and so glimpse the “speed” and “efficiency” it affords. But it’s a struggle, and every time thus far I’ve become frustrated far too quickly for the realisation of any dividends on the investment of forcing myself to use h, j, k and l.

“Screw this”, I think, and I start getting stuff done in Textmate – or indeed, any text editor into which I can just type.2

I always had an intuition that behind my resistance to vi there was a deeper, more subtle reason than mere impatience, but until I watched Bret’s talk I hadn’t really been able to articulate it. I think I now have a fingertip purchase on it, and I’m going to try to tease it towards consciousness.

In case you didn’t watch the talk (or at least didn’t get to the relevant part at around 17min), Bret talks a bit about the need to get instant feedback when “creating” something. To give a pithy example, a painter sees the cumulative effect of each brushstroke as it plays out on the canvas; they don’t have a list of strokes prepared which are then rapidly and sequentially actioned to – hopefully – produce the right image at the end.

In programmer land, waiting for feedback is the norm. Even with dynamic languages, it’s not until the code is “run” that we get any confirmation that it does what we hope (or even just what we expect) it will do.

In Inventing on Principle, Bret Victor talks about how programmers go about understanding code – for example, a simple binary search:

Binary search looks like this… and from my perspective you can’t see anything here. I see the word ‘array’, but I don’t actually see an array. And so, in order to write code like this, you have to imagine an array in your head.

You essentially have to play computer – you have to simulate in your head what each line of code would do on a computer.

And to a large extent the people that we consider to be skilled software engineers are just those people that are really good at playing computer.

This resonates completely with my experience. If I have any skill as a software developer, I think it’s because I have some aptitude at forming a mental model of a complex system in my head, and “simulating” it in various kinds of circumstance to explore what might be wrong, or how any particular change might best be incorporated.3

But anyway, keep that last sentence from the quote in your mind:

And to a large extent the people that we consider to be skilled software engineers are just those people that are really good at playing computer.

The vi editor has modes, which you must switch between to add text (“insert” mode) or move it around efficiently (“command” mode)4.

This is what often trips up those new to vi, as they struggle to understand why the keys they are pressing have not appeared on the screen, but it is also the reason why some software developers love vi so much.

In “command” mode, they can compose short commands which operate on the text. The command d5d will remove five lines from a file and place it in some part of vi’s memory where it can be pasted elsewhere. 5G will move the cursor to the fifth line of text. 2dw will delete the character immediately under the cursor, the remaining characters to the right of it in same word and all of the next word.

There’s a clear and definite logic behind the structure of these commands, and successful vi usage basically hinges one being able to internalise these commands and the logic of their composition, and then to think in terms of them when you want to make changes to a file. Each of these commands is basically a little computer program that vi plays out over the file in its current state, before presenting you with the file’s state at the end.

So there it is: being efficient with vi is predicated on being able to play computer as part of the process of editing text.

The personal insight is that deep down, I don’t really want to be simulating a computer all the time. That’s the computer’s job.

What vi is asking me to do is think about the raw contents of those files as yet another thing to be modelled (twelve words forward, insert marker, extend selection 5 lines, yank) in my mind.