I think I can see the end of my Ruby Testing Quest in sight.

As one part of the final leg of this journey, I want to take a not-too-deep dive into how some principal testing frameworks actually work, so that I can better clarify in my own mind what distinguishes them, and perhaps, if we are lucky, draw out some attributes that may help me. Somehow.

We’re going to start with MiniTest. We’ll also look at RSpec and Kintama, but not right now. This is already crazy-long.

(Update: you can now read about how RSpec works if you wish…)

Let’s say you have the following test case:

This test is obviously extremely dull and pointless, but it contains just enough to exercise the major parts of MiniTest that I care about.

The two hallmark attributes here are:

The simplest way of running this test would be to save it in some file (something_test.rb) and run it from the command-line.

The first line in the file (require "minitest/autorun"), when evaluated, loads the MiniTest library and then calls MiniTest::Unit.autorun, which installs an at_exit hook – a block of code that will be run when this Ruby interpreter process starts to exit.

Our command in the shell (ruby something_test.rb) tells Ruby to load the contents of something_test.rb, which after loading MiniTest simply defines a class with some methods, and nothing else, so after the definition of SomethingTest is finished Ruby starts to exit, and the at_exit code is invoked.

Within this block, a few things happen, but only a small part is particularly relevant to us at the moment: the method MiniTest::Unit.new.run is run, with the contents of ARGV from the command line (in this case an empty Array, so we’ll ignore them as we continue).

The default _run method parses the ARGV into arguments (which we’ll ignore right now since in our example they are empty) and then loops through the plugins (another modifiable property of MiniTest::Unit class), which is really just an array of strings which correspond to methods on the MiniTest::Unit “runner” instance. By default, this is all methods which match run_*, and unless you’ve loaded extensions to MiniTest, it is just run_tests:

The run_tests method calls the _run_anything method with the argument :tests. Within _run_anything, the argument is used to select the set of “suites” by kind (“test” suites or “bench” suites, but basically the classes that contain your actual tests).

The actual set of “suites” is returned by calling TestCase.test_suites in this instance. So what does it return? Let’s take a diversion to see what’s going on there.

The test suites, a.k.a TestCase subclasses, a.k.a. your actual tests

Take another look at the content of our test file:

When we subclassed MiniTest::Unit::TestCase as SomethingTest, the inherited hook on the superclass is called by Ruby with SomethingTest as an argument.

This stashes a reference to the class SomethingTest in an class variable1. The TestCase.test_suites method that we were looking at above returns all those subclasses, sorted by name:

The _run_suite method is responsible for selecting those tests within a suite (returned by the test_methods method on your TestCase subclass) which match any filters (i.e. -n /test_something/).

The default filter is /./, which will match everything that test_methods returns. For each matching method name, it instantiates a new instance of your suite class, with the method name as an argument to the intialiser, i.e. SomethingTest.new("test_something").

The run method is then called on that instance, with the runner (the instance of MiniTest::Unit that was returned by MiniTest::Unit.runner) as an argument. If you wanted to do the same in the console, it basically amounts to this:

We’re now at the point where the code from your test is significantly involved. Within the run method, the following methods are called3:

If we reach this point in the method, it means that the test method returned without raising any exceptions, and so the test is recorded as a pass.

However, if an exception was raised – either by the test, or by a failing assertion – then the test is marked as a failure, and the exception is passed as an argument in a corresponding call to runner.record.

Various other things happen, but this is the essential core of how MiniTest works: an instance of your TestCase subclass is created, and then the setup, test and teardown methods are invoked on it.

After the test has run

The run method returns a “result”, which is normally a character like . or F or E. This ultimately gets spat out to whatever is going to be doing the output (normally STDOUT). We saw this output above when we manually instantiated SomethingTest and then called run on it.

Actually, the puke method is called for anything other than a pass, which writes a more detailed string into a @report instance variable, and then returns the first character of that string (Skipped ... → S, Failed ... → F and so on).

Back up into MiniTest

Back up in the _run_suites method, each TestCase is being mapped via into this pair of numbers:

When the _run method itself finally finishes, taking us back into the at_exit block we started in, it returns the number of errors plus failures that were counted. This value doesn’t seem to be used, and disappears into the quantum foam of energy and information to which we all, ultimately, return.

Running tests within the console

We’ve actually seen already how we could start to poke around with tests without running them all. We can run a single test relatively easily, and determine whether or not it passed:

Unfortunately, there’s no simple way to run a group of tests (a “suite” or a “testcase” or what have you) aside from using the runner to specify a filter based on names. In other words, there’s no behaviour inherent within the TestCase class that lets you examine the result of the tests it contains. The information about which test failed, and why, leaves the instance when runner.report is called, and it’s only the runner that “knows” (in a very, very weak sense) about the state of more than just the test that is running now.

Instead the TestCase subclass is really just a collection of test_ methods along with the underlying behaviour to execute them (the run method that we examined above, and all of the supporting methods it invokes).

One of the aspects of test frameworks that interests me most is what provides the environment for each test. What I mean by environment here are things like

When a TestCase subclass is instantiated, that instance provides the environment for the test to execute. MiniTest, like test-unit before it, is using the familiar conceptual relationship between classes, objects and methods in Ruby to implicitly communicate that instance variables created or modified in one method, like setup, will be available within our tests, just like normal Ruby code.

This is, I believe, the main reason behind some of the preference towards MiniTest or test-unit style frameworks – they use “less magic”, they are “closer to the metal” – because they use the same conceptual relationships between methods, variables and self as we use when doing all other programming.

Yes, indeed. But doing so is not without consequence.

For example, it’s not typical behaviour to create a new instance of a class just to invoke a single method on it, but that happens for every test_ method. I hope you’ll agree that that seems far less natural. But this has to happen so that each test runs within a clean environment, without any of the changes the previous test might have made to the instance variables they both use, and without any trace of the instance variables previous tests may have created.

If your test framework has those hallmark attributes I mentioned above – a class definition to contain tests, and tests defined as methods – then creating a new instance of that class to run each individual test is an inevitable consequence, unless you want to do some incredible gymnastics behind the scenes.

Before I climb the ivory tower at the end of this post, let’s have one final code interlude, using these test objects we are creating in the console.

I’ve often imagined that it would be very useful if, when a test fails, you got a dump of all of the values of every instance value in that test. I don’t know about you, but I am very bored of peppering tests with puts statements, or trying to use logs to decipher what happened, when I know that if I could just see the instance variables then I could tell what was failing, and why.

We can see that the test failed, but now we can also look at the instance variables within that test:

In this test it’s pretty trivial, but maybe you can imagine that being useful when you have a ton of ActiveRecord objects flying around? Particularly if you also patch whatever is outputting your test results to print the contents of environment for all failing tests.

If you’re curious, you can also take a look at the other instance variables that MiniTest has created behind the scenes, mostly prefixed with _ to indicate an informal ‘privacy’:

Perhaps this might be worth developing into something useful? Maybe. It’s very much related to the other ideas that I’ve had about Rerunning tests in Ruby.

So, here we are at the foot of my ivory tower.

Using classes and methods is one way, but it’s not the only way to produce blocks of code (indeed, blocks are another) to be run in some specific way.

If we choose Ruby’s existing class system as the mechanism for collecting test behaviour together, we are bound by the rules and limitations of that class system when trying to do anything slightly more out of the ordinary, like dynamically composing abstract behaviour specifications.

Of all languages I’ve used, Ruby is by far the most forgiving regarding this; you can get an amazing amount of mileage out of subclassing, and including modules, and using “class methods” to modify the definition of classes at run-time. 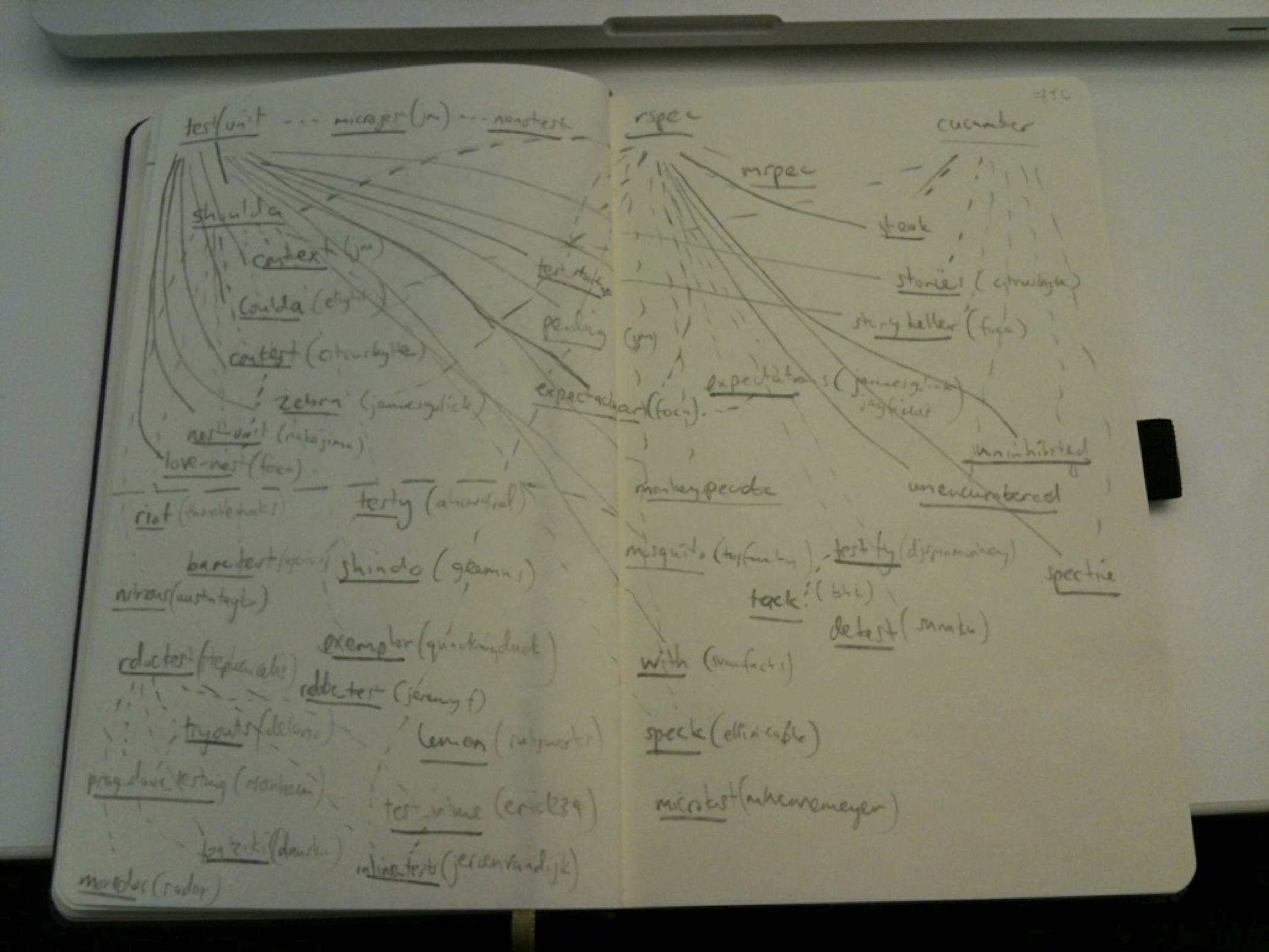 It’s really a credit to Ruby that, even within the niche of the ecosystem that testing libraries represent, and even within that, the libraries that build on MiniTest or test-unit, so much richness exists. Things like shoulda or coulda or contest could not possibly exist without this flexibility.

But that doesn’t mean that there aren’t occasions where you hit a problem using things like inclusion or inheritance. This has been on my mind for a while.

It’s my intuition that these test suites that we’re writing… well, they shouldn’t be classes. They don’t describe things that you can instantiate sensibly and that then have behaviour. They certainly don’t send messages to one another, like “proper objects” do. Classes are just convenient containers for these loosely-related essentially-procedural test bodies.

I believe that this intuition is what lies behind my interest in other test frameworks. From it springs all the ideas about composing or describing the systems under test in more dynamic or more natural ways.

In the next article, we’ll look at how RSpec works under the hood, and finally how Kintama does. Without having done the comparison yet, my guess is that they are very similar, but even within the alternate approach of block-defined tests there are many different paths you can take…